Pyromania – A Tribute To Def Leppard 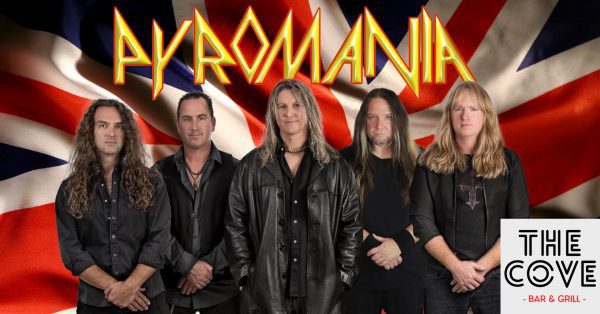 ​​​﻿​﻿GUNTER, GLIEBEN, GLAUSEN, GLOBEN. Four nonsensical words that mean nothing. But to the millions of Def Leppard fans they signify that a ceremony of both sight and sound has just begun. Being called “The Next Best Thing to Def Leppard” is an honor that PYROMANIA: The Def Leppard Experience doesn’t take lightly. Nineteen years in the making, the band captures the music and the essence of a rock band that has sold over 100 million albums worldwide. Grabbing the bull by the horns, PYROMANIA has stunned audiences all over the world with their amazing recreation of one of the most memorable rock bands and rock songs ever written. The music, the vocals, the harmonies and the screams. Don’t worry, it’s all there. Fortunately the band has worked hard to make sure that nothing is left out. And once the show starts, PYROMANIA never slows down. The guitars are on 11, the bass reverberates the low rhythms and the drums cut through the excited crowd as the band glides through a long list of energetic rock anthems and power ballads that will have the crowd singing along and screaming for more. But being professional , first-class veterans of rock are only part of the band’s arsenal﻿﻿﻿﻿﻿. At the core of this band lives an unrivaled chemistry that comes alive on the stage. The band exudes vitality and their excitement is contagious. Those of you who have seen the band already know what I mean. Those who haven’t, well, you’re in for quite a treat. Two people who noticed the band’s outstanding replication of Def Leppard were Mark Cuban and Ryan Seacrest, co-owners of the cable music channel, AXS TV. In 2014, PYROMANIA was honored to perform on Season 4 of the widely popular cable show, “The World’s Greatest Tribute Bands,” hosted by Katie Daryl. Continually improving their skills, PYROMANIA has set the bar high with a long run of successful gigs and eventually gaining the respect of Cuban and Seacrest who asked PYROMANIA to be a part of their AXS TV channel. PYROMANIA has also worked side-by-side with Def Leppard drummer, Rick Allen to help raise awareness to his organization, Raven Drum Foundation. A distinction that no other Def Leppard tribute band has ever been associated with. Members of PYROMANIA have played, toured, and recorded with Def Leppard guitarist, Vivian Campbell. And they are also the only tribute band that has been personally promoted by Def Leppard themselves. So “step inside and walk this way” to celebrate the power and the glory of this extraordinarily accurate rock band known as PYROMANIA!

Get Your Tickets Now! Limited Capacity Available.
$15 in Advance
$20 On Day of event