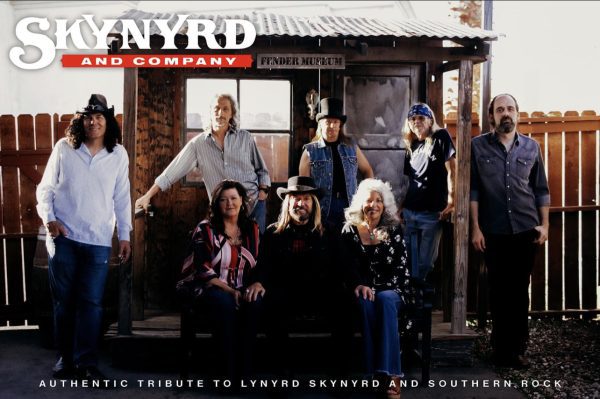 This show is General Admission only and there is no reserved seating.

Through accomplished musicianship and high-powered performances, Skynyrd and Company energizes audiences with a diverse mix of songs from Lynyrd Skynyrd’s first five studio albums plus their much-celebrated 1976 live album “One More From the Road.”

This Southern California-based group of musicians share a mutual respect and enthusiam for Ronnie Van Zandt’s vision to make Lynyrd Skynyrd the greatest Southern Rock band of all time. Skynyrd and Company is dedicated to keeping Ronnie’s vision alive with authentic renditions of Skynyrd’s classic catalog of songs that include “Gimme Three Steps”, “Sweet Home Alabama”, and “Free Bird” as well as “Simple Man”, “Workin’ for MCA”, “Saturday Night Special”, and “Call Me the Breeze.”

Between the years of 1973 and 1977, the classic lineup of Lynyrd Skynyrd defined the Southern Rock genre, leaving a legacy of iconic songs ingrained in the American consciousness. Skynyrd and Company is a group of well-seasoned musicians who came together to accurately replicate this music note for note. With a deep well of talent and a dedication to authentically replicating Lynyrd Skynyrd’s iconic sound, Skynyrd and Company has become the premiere Lynyrd Skynyrd tribute band in the American Southwest.